How To Choose Your Keto Flours

By Carine Claudepierre - Published on 11/06/2020 - Last updated on 11/21/2022 - 12 Comments
THIS POST MAY CONTAIN AFFILIATE LINKS, WHICH MEANS THAT I MAKE A SMALL COMMISSION OFF ITEMS YOU PURCHASE AT NO ADDITIONAL COST TO YOU. PLEASE SEE MY FULL DISCLOSURE POLICY FOR DETAILS

All-purpose flour or any wheat-based or grain-based flour is not keto-approved. They are as bad as white sugar as they have a lot of carbs that will raise your blood sugar level quickly and take you out of ketosis.

Luckily, there are other flours you can use for keto baking. However, keto-friendly flours have quite different properties and should not be compared or replaced by all-purpose flours to adapt a recipe.

What Are Keto Flours?

Keto flours are extremely low in carbs, mostly made of finely ground nuts, seeds, or pure fiber like psyllium husk.

Their chemistry is completely different from all-purpose flour (the one you have been used to baking with).

For example, coconut flour, a popular keto flour, has 10 times more fiber which means you will use tiny amounts to obtain the same cake batter. But also, you will need to add way more liquid to activate the fiber.

What Not To Do With Keto Flours

So as a keto baking beginner, do not try to adapt recipes or change things. Start by following a well-tested keto baking recipe, using the correct ingredients to avoid disappointment.

There are only a few flours that are keto-approved for baking, and the most common flours you will see in keto baking recipes are listed in the table below.

The table shows, per 100 grams of flours, the amount of:

As an element of comparison, the table below shows you how many carbs all-purpose wheat flour has.

As you can see, keto flours are quite low in net carbs and safe to bake keto- and diabetes-friendly bread, cakes, and more!

Almond flour is the most common flour used in keto baking, giving the most similar color, taste, and texture to regular flour.

However, some people do not appreciate almond flour in keto baking, referring to it as gritty flour.

But almond flour does not have to be gritty!

The trick is to learn how to pick the right almond flour for keto baking and to combine it will the right liquids or blend it with the right other keto flours to reach the perfect texture.

Yes, almond flour is one of the most keto-friendly flours. With only 10.6 grams of net carbs per 100 grams, it has 7 times fewer carbs than plain flour.

The Various Names of Almond Flour

It can be confusing to pick up the right almond flour for keto baking since each country uses different names to refer to almond flour.

These are most of the names you might run into that refer to almond flour, and not all of them are suitable for baking.

So, my advice in choosing the best almond flour for keto baking is to look at its most important properties:

The most common name of keto almond flours suitable for keto baking are:

Usually, any product referring to ground almonds or almond meal will not work well in keto baking recipes.

Almond flour is not particularly sensitive to humidity, with only 10.6% of fiber, but it is sensitive to light and heat that can damage nut oil and flavor. It is better to keep almond flour in a sealed airtight container in the pantry, in a dry, cool, dark area for up to 1 year.

Otherwise, almond flour freezes well in sous-vide bags. If you do so, always defrost the flour 24 hours before using it in a recipe to prevent lumps.

Here are my favorite keto baking recipes made with almond flour: 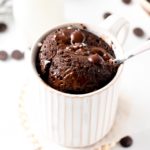 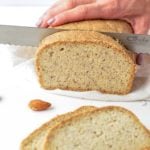 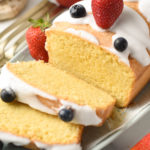 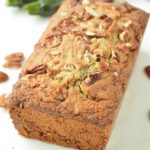 Coconut flour is the second most common flour used in keto baking.

It has a slightly sweet flavor, and a huge amount of fiber per serving that can be tricky to manage at first.

Coconut flour is rarely used on its own in keto baking recipes because it calls for a huge amount of eggs to balance the high amount of fiber in the recipe.

Therefore, some people find that recipes made with only coconut flour have an eggy flavor.

That is why you will see many recipes combining coconut flour and almond flour or psyllium husk to decrease the number of eggs needed in the recipe and still achieve the best balance of texture and taste.

Yes, coconut flour is very much keto-friendly. It has 21 grams of carbs per 100 grams which is 3.5 times less than plain flour.

You might think that 21 grams are a lot, but keep in mind that the amount of flour used in recipes is quite small!

The Various Names of Coconut Flour

Contrary to almond flour, coconut flour is always sold under one single name: coconut flour. So, all brand products called coconut flour, organic or not, are basically the same thing.

However, I have noticed that from brand to brand, some coconut flours can be grainier or greyish in color.

So, if your flour seems coarse or grey in color, it is recommended to choose a different brand, as fine as possible, and white for best results.

Coconut flour contains 35% of fiber, so it absorbs moisture from the air quite fast. That is why most coconut flours bags include a silica gel packet.

Always repack coconut flour in a sealed airtight container with its original silica gel packet to prevent humidity from coming in and making lumps.

Beyond this time, the chemistry may change noticeably, resulting in big differences in bread, cake, or pancake texture.

For all these reasons, I do not recommend storing coconut flour in the fridge or freezer where humidity can easily enter.

Here are my favorite keto baking recipes made with coconut flour: 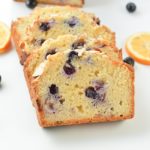 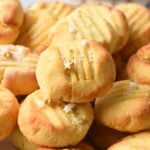 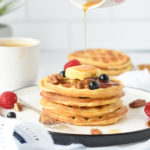 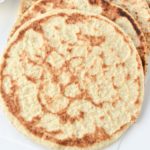 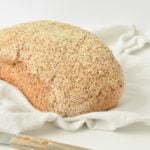 Both have been proved beneficial in improving digestive health, bad cholesterol, and reducing diabetes.

Yes, flaxseed meal has only 1.6 grams of net carbs per 100 grams because it is almost entirely made of fiber.

Flax seeds are also known as linseed. They are ground into a fine meal and sold as keto-friendly flour under the following names:

Note that the ground is generally coarser than the meal, and for best results in keto baking, I recommend buying meal.

Brown flaxseed meal has the same amount of carbs and interacts the same way as golden flaxseed meal in baking. However, it will give a strong earthy flavor that some people qualify as a fishy flavor.

So, if you intend to bake sweet recipes with flaxseed meal, do not choose the brown variety.

Plus, it will darken the color of your baked goods, and not everyone will enjoy a dark cake or bread.

Flaxseed meal contains 27% of fiber, and like coconut flour, it is sensitive to humidity in the air.

Therefore, it should be stored in a sealed jar, keeping the silica gel packet provided by the manufacturer in your bag to prevent air humidity from interacting with the meal.

Also, seeds like nuts are sensitive to heat and light, so it is better to store flaxseed meal in a cold, dry, and dark place in the pantry for up to 3 months.

After this time, the product will still be good, but the chemical properties will change and can impact the result of your baked goods.

Here are my favorite keto baking recipes made with flaxseed meal: 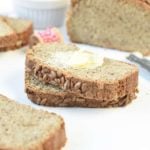 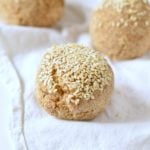 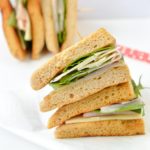 This is the fourth most used flour in keto baking. It is also the trickiest to choose and use on your keto baking journey as it is made of 70% of fiber.

Compared with all-purpose flour and its 3% of fiber!

Let us do some simple math. It means that psyllium husk can absorb 23 times more liquid than all-purpose flour.

As a result, you would not use this ingredient in high quantity, or it would make your food very dry and chewy!

Yes, psyllium husk only has about 10 grams of net carbs per 100 grabs.

Psyllium husk is the common name for several plant seeds used to produce mucilage, a thick, gluey compound that all plants produce.

It is mainly used as a dietary fiber to relieve constipation and in keto baking as a thickener.

Many brands like Metamucil sell psyllium husk powders as supplements – not as baking ingredients. This is NOT suitable for keto baking.

Whole psyllium husk is what you need in keto baking. It is grainier and absorbs moisture very well in baking, acting as a glue, a binder. It adds elasticity to keto bread and wraps and binds food.

Raw whole psyllium husk is white/ brown in color and looks like tiny flat flakes. However, when baked, some trustable brands will turn purple/blue with temperature.

While this does not impact the flavors of your keto bread, it is quite an unappealing color.

Due to its high amount of fiber, you must store psyllium husk in an airtight container with a silica gel packet to prevent humidity from entering.

Store in the pantry in a cool, dry, dark place for up to 3 months.

Like many high-fiber baking products, the properties of husk fiber may decline over time, resulting in moist keto bread.

Here are my favorite keto baking recipes made with Psyllium Husk: 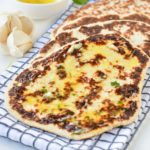 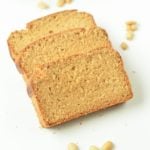 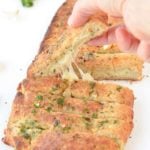 More than 90% of keto baking recipes use the 4 flours mentioned above. However, you can bake with a few other flours like the seed flours listed below.

12 Thoughts On How To Choose Your Keto Flours 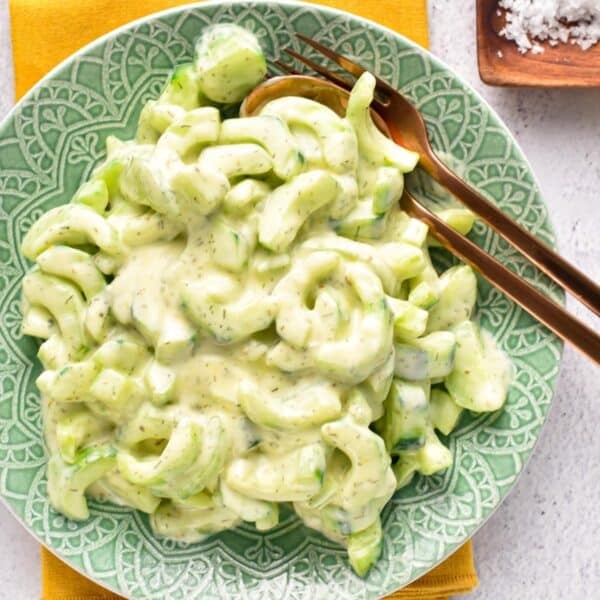 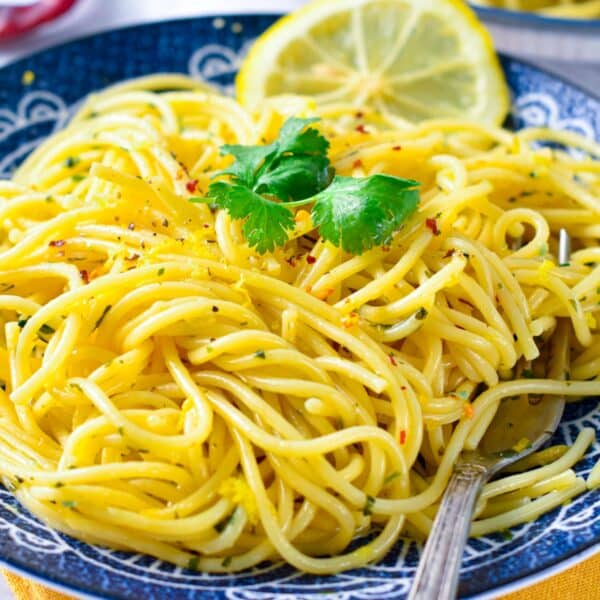