Get in shape for summer in two weeks!

What vegetables are best and which ones should be avoided on the Ketogenic diet? What are the Keto-friendly vegetables?

This Keto Vegetable List will bring you all the answers you need!

What vegetable can I eat on a keto diet?

The first thing to look at in order to find out if a vegetable is keto-friendly is where the vegetable is coming from. Not the country or region it’s coming from, but rather surprisingly whether it grows above the ground or under the ground.

Remember that it all about carbohydrate amounts, but before I list all the vegetables, I’ll remind you that on low-carb diets, we only care about the grams of net carbs. Net carbs are what’s left when we take away the amount of Fiber from the Total Carbs present in a fruit. This is because fibers (that are a type of carbs) are not consumed by the body and therefore don’t alter your blood sugar level.

If you don’t know how much net carbs you should get, make sure to check my macro calculator that will tell you what your daily carb intake should be to achieve your goals.!

You can truly achieve your weight-loss goals when you know where carbs are coming from, so read on to learn where they are in the common vegetables.

If you would like to find out what are the keto friendly fruits, check out my article on low carb fruits.

What are the different kinds of vegetables?

Vegetables are more a culinary concept than a botanic one, the term vegetable actually only describe the parts of plants that can be consumed by human beings.

It’s easy to understand why some vegetables are more keto-friendly than other when you look at why plants grow vegetables. Plants create vegetables for four main reasons:

Most of the common vegetables are in this Keto list of vegetables. In many cases, their net carbs remain the same when cooking however if it’s not the case, we’ll include the net carbs associated with the different ways of cooking. All the data below is coming out of the FoodData Central website of the US Department of Agriculture.

Most above the ground vegetables are fine to include on your Low Carb Vegetable List, however some can contain more net carbs than others, and sometimes it’s even a matter of choosing their color right. Let’s have a look at them.

Fruit “vegetables” are all these veggies that plants use to disperse seeds. Because these seeds need to have a chance to grow, plant often load their fruits with water. And since plants like to colonize as much land area as possible, these fruits must attract animals to disperse the seeds far and wide. To achieve that, plants make their fruits with some taste, smell and a moderate amount of carbs to keep animals coming. But nature has a trick, and to make sure the seeds are dispersed efficiently, many vegetable have quite a lot of fiber, so that, well, animals let them go quickly after eating. This helps keep the net carbs of most vegetables keto-compatible.

For the list of keto-friendly fruits (not vegetables), check out the Keto fruit list you can eat.

Of all the fruit-type veggies, the top keto-friendly vegetables are, in the order below:

Almost all the carbs present in olives are fibers, therefore their net carbs are extremely low. On top of this, olives come most of the time marinated with oil, and therefore are a great low-carb-friendly vegetable!

Since cucumbers belong to the cucurbitacae family (along with zucchini, pumpkin, watermelons and many others), they are full of water and low in carbs. The carbs in cucumber are as low as 2g/100g so even with fivers as low as 0.7g/100g, cucumber is still on the keto-friendly podium of fruit vegetables.

Avocados have a relatively high amount of carbs (9g/100g) but almost all of it is fibers. So it’s one of the best keto-friendly vegetable as it also contain a lot of good healthy fats.

Zucchini belong the the same cucurbitacae family as cucumbers. They share a lot of very similar characteristics and zucchinis are also an excellent keto vegetable.

Tomatoes have the reputation of being a fruit – unlike the other fruit veggies on this low-carb-friendly vegetable list that are not widely known to be fruit. Tomatoes are therefore often wrongly accused of not being keto-friendly. The reality is that their net carbs are very low!

Green peppers are the most keto-friendly kind of peppers. All three main colors of pepper (green, yellow, red) have similar amount of carbs, but quite different levels of fiber.

Red bell peppers are very similar to the green ones, but have a higher amount of carbs while having similar just a tad more fibers.

Pumpkin is one of the quite good vegetable on keto. With 5g/100g of fiber, it is good for your guts!

Green beans have 7g of carbs, and 2.7g of fiber, keeping the net carbs relatively low.

Yellow bell peppers are have the highest net carb content of any of the bell peppers, topping 5.4g/100g, this is because its carb content is quite high while they are almost devoid of fiber.

Eggplant are one of the rare vegetables that have their net carb change a lot when cooking. It goes from 3g/100g raw to 5.5g/100g cooked. The increase comes from both a higher carb amount when cooked, due to the evaporation of water, and also a lower amount of fiber, decomposed by the cooking process.

Some of the vegetables we consume are neither fruits, roots or leaves, they are actually flowers or flower buds. Take the broccoli for example, if you look closely, you’ll see tiny flower buds. These veggies are typically relatively low in carbs but they also have relatively low amounts of fiber, keeping their net carbs on the green side of this low-carb-friendly vegetable list.

Asparagus are actually more than flower buds as we also eat the whole stem. They are low in carb, low in fiber, making them an excellent Keto-friendly vegetable.

Cauliflower, unlike eggplants, are more keto-friendly when cooked. This comes from the fact that it’s normally cooked in water, increasing its water amount while also decomposing some of the carbs, and therefore decreasing its net carb amount.

Despite coming from the same family, the broccoli doesn’t absorb as much water as the cauliflower, so its net carb remain stable when boiled, at 4g/100g.

Leafy greens are all these vegetables that that we mostly east as leaves, like Spinach, Cabbage, Kale or lettuces. They are all very good on a low carb diet.

Kale is an all-category winner of the keto vegetable list, with almost all of the carbs being fiber, it’s perfectly compatible with a Keto diet.

Spinach is a hit to bring a lot of nutrients to your plate while keeping the carbs at bay. With fibers almost making up all of the 3.6g of carbs in this leafy vegetable, spinach is topping the Keto-friendly vegetable list.

Despite having almost 6g of carbs, cabbage is still a very keto-friendly vegetable because of its high amount of fiber.

Brussels sprouts have good fibers but relatively high carbs. That combination keeps this vegetable near the bottom of the above-the-ground vegetables for a low-carb diet.

Under-the-ground vegetable have the particularity of being mostly used by plants as a way to store energy, they are the starchy vegetables. These veggies contain mostly polysaccharides, generally starch. They are therefore often quite high in carbs, but lower in fiber thus high-ish in net carbs. The cooking method for under-the-ground vegetables often has an impact on net carbs!

Some of these are guaranteed to take you out of ketosis, while some others can still be consumed in low quantity. And for some like radish, you can have many before you’re in trouble!

Radish is a great Keto-friendly vegetable, raw or not.

This old fashioned vegetable has the particularity of having less net carbs when cooking, but it’s right up there in net carbs – only take in small portions!

Carrots also get better when boiled, but what out as it’s easy to eat too many of them. Small amount only on a Keto diet!

Onions also have reduced net carbs after cooking. Given that we tend to only eat a very small amount, it’s still fine to add an onion on a large pot. Try to avoid in salads though.

Very few vegetables see their net carbs drop that significantly when cooked. Leeks almost lose half their carbs when boiled, so avoid eating them row.

One of the few root vegetables that get worse when cooked is the beetroot or beet. It’s OK-ish raw, but avoid it when cooked.

Celery root also called celeriac is quite high in net carbs, both raw or cooked. One of the underground vegetables to avoid on a Keto diet or eat in very low amounts .

Potatoes are not keto-friendly unfortunately. But it’s useful to highlight that many places list the net carbs of raw potatoes, tricking you into thinking it’s almost OK. But you are more likely to eat them baked, boiled or fried, hitting close to your macros for the day with only 100g.

The net carbs in parsnips don’t change much with cooking, but they remain too high to be recommended on a keto diet.

Sweet potatoes are here for illustration purpose as the net carbs vary drastically depending on how they are cooked. Net carbs drop a bit when boiled, but increase slightly with oven-baking and sky-rocket with frying. Sweet potatoes are sometimes seen as a healthy option, it is mostly because their Glycemic Load is much lower than the Glycemic Load of potatoes.

If it’s all too much information, remember the rule of thumb for your keto food list:

My favorite recipes with Keto-friendly vegetables

Now that you know which vegetables are best on Keto, these recipes might interest you! 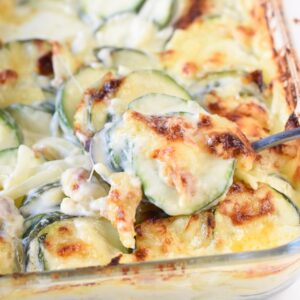 Welcome to my low carb baking blog, I am happy you joined me here and will do my best to support you in your low carb journey providing delicious low carb recipes that won’t blow your carb count!

most recent From the blog